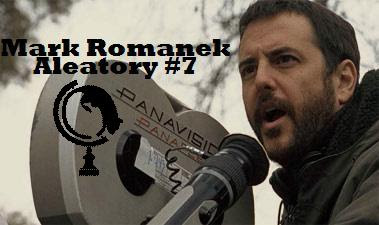 You may have heard of Mark Romanek.

Mark spends his time directing music videos. Some of the videos he has directed include Nine Inch Nails' "Closer" and "The Perfect Drug", Fiona Apple's "Criminal", Lenny Kravitz's "Are You Gonna Go My Way", Janet/Michael Jackson's "Scream", Johnny Cash's "Hurt", and Jay-Z's "99 Problems", just to name a few. He also directed the incredible paranoia-thriller One Hour Photo starring Robin Williams, along with some of the revolutionary iPod TV spots. He's won everything from Grammy Awards to VMA's, and now sits down to partake in the seventh Globecat Aleatory. Ladies and gentlemen, without further ado: the inimitiable Mark Romanek.

4. Favorite person to have worked with?

I found it thrilling to work with Johnny Cash, Paul McCartney, Bob Dylan, and David Bowie. My experience with Robin Williams on One Hour Photo was really great too.

21. Favorite album(s) from the past year?

28. What instrument would you most like to learn to play?

Acoustic guitar. To my great shame, I never learned. (I took a lesson when I was nine and was discouraged by a teacher who said I had no aptitude. I later found out I was a lefty. That guy was a dumb asshole.)

32. Best thing you learned this week/month?

I learned to get the fuck out of the way.

33. What's something you could teach anyone in an hour or less?

I suppose I could teach someone how to use a 35mm still film camera.

42. What's an image that haunts you to this day?

When I was five years old, I was very eager for the next day to come, because it was my birthday or Christmas or something. The idea of having to wait all night long for the next day to come was unbearable to me. So, that evening, sitting in my bed, I closed my eyes and wished with all my might that when I opened them, it would be morning. And it worked! (I swear to God.) It was morning in the blink of an eye! I thought the world was magic and that I had magical powers. (I guess, I must''ve closed my eyes and fallen asleep without realizing, and I actually opened my eyes about ten hours later.)

44. Something you've heard, know is false, but wish were true with all your heart?

I have an opposite example. I heard something that's probably true and wish with all my heart that it wasn't. Someone who actually knows J.D. Salinger said that he's stipulated in his will that when he dies all his unpublished manuscripts are to be destroyed. I think this would be a cultural tragedy of unimaginable proportions.

54. So far in your career, what's been your proudest accomplishment?

I guess, One Hour Photo. That, and a handful of my music-videos.

I would say that I'm proud to be involved with all the Apple iPod silhouette TV spots, because I do think it's a really great product, and the ads are sort of iconic . They are defining an aspect of the era. (I should note that the silhouette idea itself is not mine, of course. I just help execute them.)

If it was "worst" I almost certainly would've changed the station before I could discover the title. I have a low tolerance for insincere, synthetic crap.

85. What's the biggest mistake you've made that you inadvertently learned a great lesson from?

Isn't any "biggest" mistake inevitably an enormous learning experience? I think any mistakes that big would be too humiliating for me to discuss in this forum.

89. You just died. I'm sorry. Fortunately, your will states that you want very specific music to be played at your funeral. What did you choose?

90. Sexiest thing about you?

I can be pretty funny, once you get to know me. (Just not so much in this questionnaire.)

+++
Visit Mark's official website.
Posted by Globecat at 9:31 AM