Comic Book Tattoo week is going strong here at Globecat! Our third artist is none other than Tom Williams, who contributed the story and illustrations for "Northern Lad," one of Davecat's all-time favorite Tori Amos songs. (If you missed parts one and two -- book editor Rantz Hoseley and writer Kelly Sue DeConnick -- be sure and check them out as well!) Thanks for taking the time for us, Tom: we truly appreciate it.

>>>> Had you been a Tori Amos fan before the project started? If so, what's your favorite album and why?

I've seen her twice in concert so yeah, I'd say I'm a fan. She stopped hitting Columbus after that. I'd say probably a tie between Little Earthquakes and From a Choirgirl Hotel. Boys from Pele and Scarlet's Walk a close second. It seemed to all hit at the right time for me. I couldn't pop it on around friends. The first couple of albums seemed to be littered with everyone's breakup song. The real experience is hearing her play live. You have to hear her live.

>>>> How did you become a part of Comic Book Tattoo?

I was a casual poster on the Engine board and Panel & Pixel. Rantz shot me an email and I immediately said y 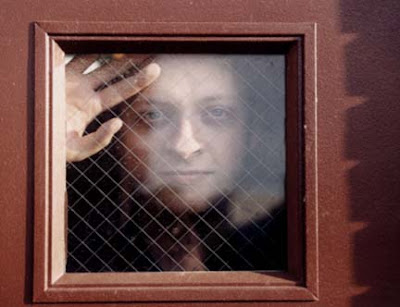 >>>> What made you choose to write and illustrate the story for "Northern Lad"? What is it about the song that made you pick that one over any other?

It's a song that I catch myself humming every so often. It's so haunting and simple in it's melody. I dug up the lyrics online and the story appeared to me right there. It almost seemed obvious.

>>>> If you would, tell us a little bit about the story to "Northern Lad".

I don't really want to spoil it for anyone because it's pretty short. It's about the details of the song but not. Initially I wanted to work it as a silent strip but kept going back to some wording here and there.

>>>> What was the biggest challenge in converting music to illustration? Have you had any experience with combining different artforms in that way before (other than text and visual art, of course)?

There is some head scratching. There were some songs that were off limits, some that I thought would be snapped up, etc. That and you have a huge catalog of songs to pick from. Like most things I find in my work, the first idea is usually the best one. You're conceptualizing all the time. Pulling in from different influences.

The story came pretty instantaneously. The concept (of the story) plays with the details of the song but not a verbatum interpretation of the song. Sort of like doing a music video or imagining it playing in the background like a soundtrack. It's like jazz. 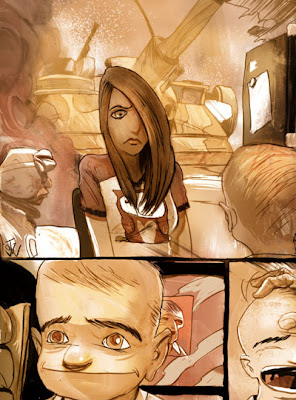 >>>> Do you normally do both the writing and the illustrating yourself for a project, or do you work in conjunction with others? Which do you prefer working with, words or inks?

I've done both. I've collaborated with writers in the past in every current format of comic: graphic novel, the 'floppy', and on the web. I like combining the two. I've been doing so long that they're inseparable. Sometimes I'll have an idea for a series of paintings. It's easier, sometimes, working with a writer. Most of the writers I work with I personally know in some way. It's rare to get that pairing that meshes well together. The most rewarding for me is the fight to the finish line. Working on the story and finishing it. It gets so intense toward the end that half the time I abandon them. Maybe come back to it later.

>>>> How has your opinion of Tori Amos changed since working on this project?

Not at all. It's been great.

>>>> Now that you've had this experience, are there any more songs (Tori's or otherwise) that you'd enjoy illustrating/writing a story about?

There are a couple that she only does live. "Sugar" would have been a good one. I'd love to do something from Cursive, White Stripes, Man Man, Tom Waits, and or PJ Harvey. Those are the ones that jump out at me right now.
Posted by Globecat at 11:26 PM