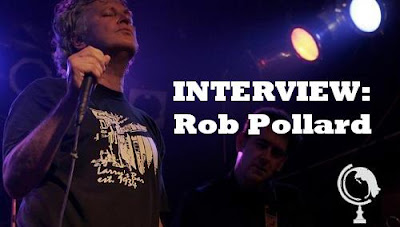 Q: How does Globecat write an intro about Robert Pollard?

A: You give him a guitar and let him write it for you. Though a six-stringed instrument was unavailable at the time, Robert Pollard -- the frontman for seminal indie-rock outfit Guided By Voices, co-founder of roughly a billion side-projects, film score composer, and iconic songsmith -- managed to sit down with Evcat to discuss the use of the Guided By Voices name, that new band that's he excited about (hello, Boston Spaceships!), and then takes time to clear up the biggest misunderstanding that anyone would ever have about him ...

+++
>>You recently launched your own label, Guided By Voices, kick-starting it with ...Is Off to Business, one of the most critically heralded records you've released thus far. What were your reasons for revitalizing the GBV name for your new label venture? Will the GBV name forever be associated to you or does it just apply to a certain era of which you were recording?

Well, I had actually entertained the notion of using the name Guided By Voices again, but then I thought that it might be construed by some as a move to sell more records. It wasn't but it might be seen that way. I just thought, what the fuck, Guided by Voices had 50 or 60 members over the course of 20 years, so what's the difference? Anyway, my manager, David Newgarden, suggested when we decided to split from our label and form our own, that we use it as the label name. So I agreed and we went with GBV, Inc. The name Guided by Voices does apply to a certain era as a musical entity, but as a mental/spiritual concept, it is ongoing and stays with me.

>>After your collossal, epic closing show for GBV, you've been relatively quiet on the touring front. With the new Circus Devils disc coming out, do you see that changing anytime soon? With a back-catalog as extensive as yours, do you ever find difficulty in picking a set-list?

Well, I have a new band that I consider to be real and not a side project. It's called Boston Spaceships. We just released our first album, we have another in the can, and I just finished the demos for a third. We're doing a U.S. tour starting September 25th. Yeah, I've got a lot of songs so it's not difficult to make a list. We'll be doing the Boston Spaceships album, and my new solo album, Off to Business as well as some side project stuff and some old obscure GBV material. Suitcase 1 & 2 songs. Maybe a couple old crowd favorites.

>>Starting with Bubble, you've gradually shown more interest in scoring films, working in both songs and instrumental numbers -- how has soundtracking changed/effected your songwriting style (if at all)?

No, not really. For the most part it's just been small budget films and the director or studio requests songs that already exist on record. Steven Soderbergh and I have shared mutual interests for a while. He requests particular songs that he believes will suit the film. I've provided music for Full Frontal, Bubble, and the upcoming musical Cleo based on the life of Cleopatra. For Bubble I gave him a compilation of 45 or 50 acoustic demos and he chose, I think 10 for me to film. So far, it's been done in this matter, but at some point I might like to write songs specifically for a film.

>>What is the one thing that people most misunderstand about Robert Pollard?

That I'm some sort of mad, band-member firing dictator. I ask that you have a good time, be enthusiastic and play your instrument.

My biggest regret was writing "Hold On Hope". A lot of people like it but I consider it pompous, both lyrically and structurally. My proudest accomplishment was the recording and releasing of my first post-GBV solo album From a Compound Eye. I always wanted to do a double album and it's not easy to pull off. It has to be epic and sprawling with a lot of good songs, or it can me Metal Machine Music. That's ok too. I'm pretty proud of Bee Thousand and what it means to people, too.