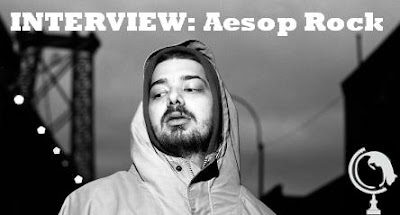 What Aesop Rock has done is nothing revolutionary. Underground rappers have existed for years, and with the rise of bling-culture, there are those who still feel that rap has something to say, far more than just booty jams built upon phat beats. With that said, Aesop Rock was one of the first signees to El-P's Definitive Jux label to truly make it big: his abstract, rapid-fire, dense lyricism always riding on the inventive, powerful soundscapes cooked up by Blockhead, El-P, (and eventually A-Rock himself) proved to be exactly what people have been wanting to hear. His last album, the brilliant None Shall Pass, even wound up cracking the Billboard Top 50, proving that there is an ever-growing audience of people who still crave for genuine rap artists with something to say, who can be both smart and smart-allecky within the same verse without breaking a sweat. Aes is currently in the midst of another huge tour, but Bazooka Tooth still found time to sit down with Evcat and take part in a fantastic interview with a little site called Globecat ...

+++
>>You've been a touring veteran for years -- I still remember when you came along with some Jukies to SLC -- but recent concert polling shows that it's been hard to get people to attend rap shows. What do you get out of the touring experience?

Hm, I dunno; my recent tours have been better than ever attendance wise. The touring experience is a hectic one. It seems like it should be easy, driving around, playing shows. But a lot goes into the planning of these things, and this is where it can start to feel like 'work'. When you sing up to rap they don't tell you how many spread sheets and budgets you're gonna have to figure out. It can be a really rewarding expereince, as it's an instant connection with you and your fanbase, and that is the reason we go. The on stage time is fun, the people are great. But it is exhausting in every sense.

>>One of the best parts of following your career has been watching you rise to prominence as a producer, especially with Bazooka Tooth and None Shall Pass, both of which began going beyond the typical drum-n-bass pallette that was defining a lot of indie rap at the time. When recreating these sounds onstage, do you look to do more than just hand it over to the DJ? What, in your mind, is a successful Aesop Rock show?

Well, luckily I work with a DJ who has a very creative ear and not just a fast scratch hand (though he has that too). When in the studio, we don't really think about how to pull it off live, but of course we are eventually faced with that. We rehearse a lot and come up with the best option, which cuts should be done live, which elements would be most interesting to recreate on stage, etc. A successful show is a good performance where everyone has fun, I don't think that defnition ever changes much. There's a lot of ways to get to the goal, but it's usually the same goal.

>>I think one of the riskiest moves you ever did in your life was with Fast Cars, Danger, Fire & Knives, in which you actualy published your lyrics in their entirety. I think, especially for someone with wordplay as dense and abstract as yours, it's a noble move, but it also implies that that whole phase of your career is behind you now: it's been catalogued. What is different about how you're shaping your future now?

I hear you, but at the end of the day it's all mine. It did kinda feel good though to put it all out at once, but more like how paying off your overdue phone bill feels good. People wanted the lyrics, and I have never been a fan of doing lyrics inside my liner notes, so I just grouped them together and put it out. Maybe after 5 more records i'll do another. I dunno, I don't really have a master plan with any of this. I'm kinda just doing what feels interesting at the time. I did put out the NSP lyrics in a digital book with accompanying photos, and it was definitely cool, but the paper book was fun. Expensive, but fun.

>>One of my favorite tracks off of None Shall Pass was "Coffee" with John Darnielle [of the Mountain Goats] -- I wasn't sure how it was going to sound when I first heard he was announced as a guess, but his voice wound up fitting the track absolutely perfectly. Do you see much of a bridge between rock and hip-hop these days? Is "Coffee" a hint at more collaborations to come?

Me and John will hopefully do more together. I think we're both into it, it's just a matter of getting it done. Most of the bridge between rock and hip-hop is littered with shitty bands. Rappers have the worst taste in rock ever -- what's up with that? I was very happy with John's part on "Coffee". He's really unmatched in many arenas.

Well maybe I would've done a few things differently, but I wouldn't say I have any regrets. I don't sit around kicking myself really. I'm not really proud yet either. I'm not the kinda guy that pauses, stands back, and lists my accomplishments. If I sat analyzing my own career at this point it will slow me down. I'm just trying to stay afloat and keep it coming I think. There is no guarantee that anyone will show up at tomorrow's show, so I try to take this all a day at a time.

>>Thanks for your time!

Visit Aesop Rock's MySpace.
Posted by Globecat at 10:11 AM