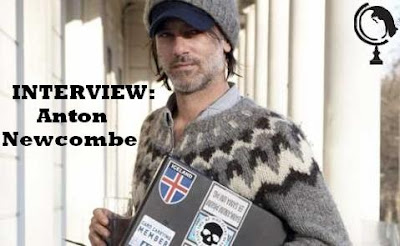 There has much that has been said about Anton Newcombe, the frontman for the seminal rock-revival outfit The Brian Jonestown Massacre. Newcombe has inspired leigons of fans, ruffled many feathers, and still encounters his fair share of detractors. Yet if Anton is anything, he's uncompromising, as he will never, ever, make a record that alters or affects his core vaules. He like his idols raw, and his own music even grittier. With this year's release of My Bloody Underground -- the BJM's long-awaited return to outright rock -- Anton kindly sat down with Evcat to answer some questions about his new disc, his career, and just how awesome it is to live in a place like Iceland. Ladies and gentlemen: Anton Newcombe ...
+++
>>Much has been said about My Bloody Underground, easily one of the most polarizing records that you have released so far in your career. The BJM website now goes back to the Committee to Keep Music Evil site, which makes me wonder (in keeping with the evil theme): do you ever read your reviews?

I do read some of them. I would be lieing if I said that I don't care what people think, because placed in context ... I do .... it's just that I don't think rock journalism means jack shit to an artist. It's not like magazine writers get to pick the content. It's add [sp] driven. I know that my work will be misunderstood compaired to whatever Disney pre-puebesent robot Simon [Cowell] is fucking back stage at Pop Idol.

I just make audio inviroments I enjoy, and if people like them great, if some people don't great. I'm looking forward.

>>When making your records as of late, what do you hope your fans will take out of your songs?

I hope they they find a way to interact with it in some way. Somtimes that can just mean provoking thoughts or poseing questions. Sometimes it could be engulfing the informed but submissive listener in a soundscape. It doesn't matter to me as I am working on new pieces so I am removed. I have allready explored this work in depth and have moved on.

>>One aspect I quite like of Bloody is how it's, in a way, a return to form stylistically, simply because it goes back towards your heavier rock inclanations after your detoured with quite a few country-rooted EPs. What instigated the change?

I'm quite disapointed with the modern world and more importantly, the people in it. I got a prescription for anphetamine and did some majic mushrooms in Iceland and created some art. No listen I am not advocating drug use, and it's not something I do all of the time. It was an experiment. We created some music and then made films.

>>What is more cathartic: recording your songs or performing them live? Which do you ultimately prefer at the end of the day?

It's like a pendulum. It's swings back and forth as they are two different mediums. Live involves rock and stamina. The studio involves science and retrospection.

>>Back in '04, much was said of your denouncement of [the Ondi Timoner documentary] Dig!, yet it still managed to introduce you (and continues to introduce you) to a wider audience. Have your thoughts on the movie changed at all? What would you have done different about that experience?

No[,] Ondi Timoner is a fucking greedy cunt, a liar and I wouldn't piss on her if she was on fire. Infact, I wouldn't weep if her and her ilk were hit by an asteroid.

I don't view my work as a korea. A career sounds like something that asshole in jet worries about. What a joke. That's something jack white works on. Die!Die!Die!, that's a band. The Church is a band ... all that korea bullshit makes me want to puke. Ask those fuck heads in Silverchair where their career went ... I don't listen to fat bald guys at record companies that think in terms of careers. I just don't. I am a productive artist. I inovate and help others do the same. I am an individual. I'm looking forward to playing Australia, New Zealand, my shows with My Bloody Valentine and going back to Berlin and Iceland where I live and making more albums. I could really give a shit about anything else besides that and my wife and childrens welfare.

Visit the Brian Jonestown Massacre's website.
EVCAT: In a somewhat unusual gesture, Anton included several YouTube links at the end of his e-mail for this interview. In keeping with our mantra of letting artists write freely, we are posting those same links below, many of which feature either the BJM tearing it up live, or one of Anton's many powerful rock infulences captured in these vintage clips of raw power. Enjoy.
http://www.youtube.com/watch?v=EzNa51s3i8Y